How can sustainable water management pattern be achieved in the context of increasing intensities of water usage and an extreme physical environment? A team consisting of natural and social scientists, engineers and private sector companies adresses these challenges in the framework of a model project in Mongolia.

Like other countries in Central Asia, Mongolia faces a massive challenge of safeguarding its freshwater resources. Climate change, population growth, large-scale land use change, water contamination due to mining activities and outdated infrastructures in the water supply and wasterwater sectors have in the past years caused both a deterioration of living conditions and the degradation of aquatic ecosystems.

Important problem fields in this context include:

In order to develop and implement solutions, the MoMo team collaborates closely with scientific institutions, authorities, schools and communal water suppliers in the target region. In the year 2013, the Kharaa River Administration took up its work and will in the future be advised by the MoMo project.

Objectives of the project

The central objective of the MoMo-Project - Phase III is the knowledge-transfer and implementation of an IWRM  in the Region, based on the results of two previous Project phases. Because of the prevailing highly continental climate, a rapidly progressing land use change and increasing extraction of raw materials, Mongolia is studied as a model region for Central Asia.

Building on the results of MoMo Phase I (2006-2009) and MoMo Phase II (2010-2014) the third phase will work on the implementation of water management measures. The measures that have been developed or are to be developed aim to

An IWRM concept will initially be developed, adapted and implemented for the catchment of the Kharaa River in the North-East of Mongolia.The work is organized as a multilateral interdisciplinary collaboration which takes into account the specific conditions in different subregions of the catchment.

In order to deal with the complex challenges of an IWRM in a systematic way, the MoMo project is structured into three thematic and one cross-sectional module: 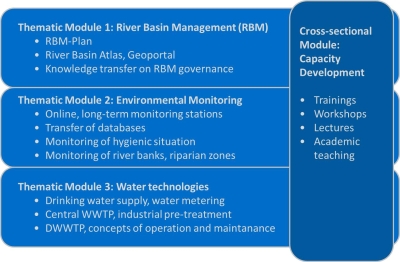 The Mongolian government has declared the Integrated Water Resources Management concept as a role model for managing the country’s water resources and it is now planning to develop and implement management concepts for all larger river basins. The MoMo-project is supporting this process: on the one hand through scientists who are keeping in close contact with the Mongolian Ministry for Environment, Green Development and Tourism, the National Water Committee as well as the respective river basin management authorities for the model region Kharaa and offering advice about concepts, and on the other hand by examining Mongolian „water governance“, which is going through an extremely dynamic phase of development. The results will be used to draw conclusions on framework conditions in the field of water management in Mongolia and for comparable regions in Central Asia.

Mongolia is faced with numerous challenges: water is becoming increasingly scarce and rivers and groundwater are polluted from intensive industrialisation and in-creased mining activities throughout the nation. Moreover, data on the state of the environment are generally limited. The MoMo-project was able to collect and analyse essential environmental data for the Kharaa river in Mongolia. In the third phase of the project these data are being made available to Mongolian users and decision-makers via a web-based GIS as well as a long-term data management system will be established. Furthermore, extensive training programmes are being conducted in environmental monitoring.

In Mongolia, it is not only urban settlements that are the focus of water consumption, but also the wastewater discharge into surface waters and out-dated infrastructures mainly from the 1960s certainly do not help. For example, the unofficial yurt settlements on the outskirts of cities that have seen an unprecedented rate of expansion over recent decades are usually not connected to central public utility services. Consequently, the project has introduced some pilot measures over recent years to reduce water losses from pipe leakages in the urban public utility services distribution network as well as a pilot project for the central, semi-central and decentralised treatment of wastewater. Such solutions are now to be implemented on a larger scale and it will be tested as to whether they can be transferred to other regions of Mongolia.

By the year 2014, several important milestones of the project were reached:

Capacity Development activities were carried out at various levels, ranging from the general public to the educational sector, water professionals and political/administrative decision-makers. Study tours to Germany were conducted for students, experts and stakeholders dealing with environmental education, decentralized waste water treatment and urban water management. In September 2011, several Mongolian government delegations visited project sites, including the Mongolian Minister of Nature, Environment and Tourism (and other ministerial respresentatives) as well as a high-level delegation from the Ministery of Roads, Transport,Construction and Urban Development. These delegations expressed a particular interest in a further dialogue regarding the potentials for a country-wide hydrological monitoring system, the issue of urban water management including sanitation, and the relevance of the results in the context of mining.

One of the MoMo project objectives is to support the transfer of the scientific and technical findings to (i) practical full scale application of innovative solutions and (ii) the solving of comparable issues in other regions.

At the end of the second project phase, the MoMo Project had :

Scientific documentation generated by the project and developed in cooperation with senior professionals from several Ministries are available to domestic planners and decision makers for IWRM water supply and sanitation-related planning, policy enhancement and investment programming in the Kharaa river as well as other comparable river basins in Mongolia.

A considerable part of international investments in Mongolia now targets the mining sector. The large water demand of the mining sector, limited water availability in many deposit areas and risks of permanent or accidental water contamination, mean that results and expertise showcased in the MoMo project are highly relevant in this context.

The innovative pilot technologies being proof-tested in the field of urban and rural water supply and wastewater treatment and management are generating a wealth of design and operational solutions that can be easily used for the planning and viability assessment of full scale systems operating efficiently under the extreme weather conditions prevailing in northern Mongolia. Results and outcomes of the R&D project are expected to be relevant for application and duplication beyond the Kharaa river basin including other regions of Mongolia and Central Asia. Strong signals of interest on the results and findings of the project were already received from a number of Mongolian authorities as well
as from Russia and Kazakhstan.

Video about the Project

The IWRM Project created Movies, where Technologies and Instruments for the sustainable use of Water are introduced: