Improving natural resource management in the Aral Sea Basin: The transdisciplinary ZEF/UNESCO project in the Khorezm region of Uzbekistan

Reducing the inefficient and excessive use of natural resources, while improving rural livelihoods, is important for the sustainable development of Uzbekistan. A pilot project led by the Center for Development Research (ZEF) at the University of Bonn is dedicated to improving the economic efficiency and ecological sustainability of the agricultural sector in the Khorezm region. An important part of this research is working with local stakeholders to design and successfully implement technologies and innovative solutions developed during the project’s lifetime.

Khorezm is located in the northwest of Uzbekistan in the lower reaches of the Amu Darya River the largest former tributary of the Aral Sea. The Khorezm region accounts for only a small fraction of the over eight million hectares of irrigated land in the Aral Sea Basin (ASB) 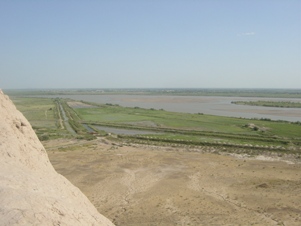 (approximately 275,000 ha), but is critical in the water budget of the Amu Darya river delta, and is representative of lowland agricultural production systems throughout the Basin. The region serves as a model case in Uzbekistan for developing new technologies that may improve the management of irrigated lowlands throughout the ASB.

The agricultural sector in Uzbekistan is the primary source of hard currency earnings and accounts for more than 30% of GDP; the sector is also the country’s primary consumer of renewable and non-renewable resources. Over 1 million tons of fiber are produced annually in Uzbekistan, making it the world’s 5th largest producer and 2nd largest exporter of cotton. After gaining independence in 1991, cotton production declined as the government increased its domestic production of wheat to achieve greater food security. Despite various land reforms in recent years, the state retains tight control over all agricultural production. Methods of agricultural management and production are remnant of the Soviet period and farmers cannot respond to market signals, climatic variability, or readily incorporate technological innovations.

The demise of the former collective farming system has left a vacuum in service organizations such as extension and training services or access to micro-credit which were once provided by the state. Demographic growth, rising quotas for cotton and wheat, combined with increasing fluctuations in temperature and water variability, are compromising rural welfare and the overall sustainability of the agricultural sector.

The overall aims of this project are to increase the economic efficiency of agriculture, while improving the natural ecosystem and its services. Solutions to regional problems are being investigated at three levels:

Sustainable solutions can only be found through close cooperation among natural, social and economic scientists, as well as direct involvement of local stakeholders. An important aspect of the project’s activities is local capacity building and, to this end, a considerable amount of effort and resources have been invested in local training and infrastructure.

The economy of the agricultural sector
The project is concerned with the economic impacts of improved water management and availability. Research within the project has also been carried out on the role of water pricing and optimum cropping patterns to maximize yields under ever increasing water variability. Similarly, studies on the potential impacts of liberalizing the state-controlled cotton market on water availability have shown that the removal of the existing state-order system may not have a clear and positive impact on farmer welfare. There is further work being done to gather quantitative and qualitative evidence on the economic, social and ecological effects of any proposed liberalization scenario.
To improve land and water use in Khorezm, it is necessary to understand the efficiency and effectiveness of existing infrastructure and markets. To this end, research on the value added chains for primary crops (e.g. cotton, wheat, fruits and vegetables) showed how increased local processing could lead to a significant reduction in inputs, while improving economic efficiency and income in the region.

GIS database
A laboratory for Geographic Information Systems (GIS) was built at the project’s office site in Urgench. High-resolution maps showing all major features of the region, including soil, groundwater, crops, land use, as well as economic and social indicators have been developed. The GIS database is an integrative decision-making tool for optimizing the management of water, crops, land use, and soil salinity. Researchers from the German Aerospace Center (DLR) are developing tools to forecast cotton and other crop yields, based on remote sensing data from satellite images. These tools will be used to assist local decision-makers in improved planning. 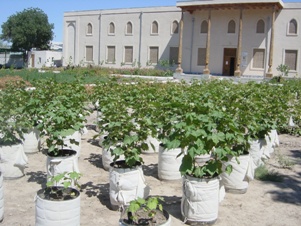 Irrigation water management
Agriculture in Khorezm is reliant on the vast irrigation system as the arid region is otherwise unsuitable for production. A complex network of more than 16,000 km of irrigation and 7,700 km of drainage canals were designed and implemented during the Soviet era to deliver water to large-scale farm units based on a centrally-organized irrigation water scheduling and delivery system. Land reforms initiated after independence, however, have resulted in the break down of large collective farms into numerous smallholder farms. This has led to a serious mismatch between the irrigation water supply system and the actual demand by the new private farmers with adverse implications for water use efficiency due to poor reliability, timeliness, and equity in water supply.

To address the ongoing problems of substantial losses due to both technical and institutional deficiencies, irrigation scenarios have been tested using mathematical modeling to explore various options of decreasing the region’s overall demand for irrigation water. To better understand the major causes of soil salinization and related land degradation in the region, a package of integrated measures have been developed, including technology options to reclaim degraded land, as well as alternative management approaches for water institutions.

Land use
Conservation agriculture practices and reforestation are important elements of the technology options to improve the productivity and long-term sustainability of land use systems in Khorezm. Alternative crops are being investigated which could provide more sustainable alternatives to the present crop portfolio of cotton, wheat and rice. Technologies to promote the production of local tree species on marginal lands have been explored and reforestation has shown to be a win-win solution for both farmers and environment.

Institutions
Transition from a centralized to a market-based economy has led to fundamental institutional and organizational changes in Uzbekistan. In particular, land reform policies have left a gap in agricultural services which were previously provided by the state. The absence of an organization for local water management led to the establishment of Water User Associations (WUAs). Other service provision issues, particularly with regard to agricultural extension, input provisions and marketing options, are also emerging. Researchers on the project are investigating both the poor performance of farmers and agricultural service institutions linked to institutional gaps, and how regional institutions can be improved in terms of socioeconomic and environmental performance.

Gender
Social differentiation and economic diversification processes are starting to unfold in the wake of privatization. Consequently, women are affected differently from men regarding access to land, the division of labour, and farm-level decision-making. There is some evidence that women and men have developed different responses to the agrarian reform process. To comprehensively understand the dynamics of a diversifying rural economy, this project is investigating the gender dimensions of rural entrepreneurship in agricultural production, in off- or non-farm small enterprises, as well as labour and trade migration. Furthermore, a study of gender-related differences in rural areas will allow for gender-oriented institutional strengthening.

Innovation diffusion
The research activities in Phase I and II have generated a number of "innovation packages" designed to enhance agricultural performance in the region, improve water management procedures, and provide the necessary policy background for the adoption of innovations. To ensure the successful diffusion of innovation packages, such as conservation agriculture, agroforestry, or aquaculture, further focus will lie on the integration of research with local stakeholders, thereby improving our understanding of how innovations are successfully transferred and adopted.

Capacity building (as of mid 2007)
More than 80 scientists are involved in the project. Thirty-three have received a BSc and 46 an MSc degree in Uzbekistan. Ten of a total of 23 PhD students involved in the project have graduated, six of them from Uzbekistan. A modern office building was constructed on the campus of the University of Urgench with support from UNESCO; this building provides optimal laboratory space and is home to our state-of-the-art GIS lab. 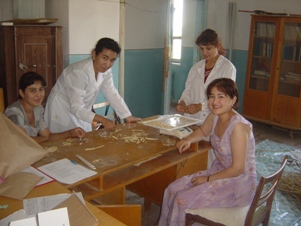 Partners
Cooperation with local, regional and national decision makers in Uzbekistan is essential for achieving and implementing the project’s stated aims. The project is the largest scientific cooperation project in Uzbekistan. Prominent among the local partners are the State University of Urgench (UrSU), the regional governor (hakim) of Khorezm, as well as the Uzbek Ministry of Agriculture and Water Resources. The project is being funded by the German Federal Ministry of Education and Research (BMBF), and supported by UNESCO. The German Aerospace Center (DLR) is also an important cooperation partner.

Phase III of the project is running from 2007 to 2011. During this phase, alternative policies, institutional arrangements, and integrated technologies will be explored and tested. The restructuring process in Khorezm will certainly exceed the lifetime of the project and will therefore require the long-term commitment of local stakeholders. In the final transition period the University of Urgench will take the lead in continuing with the research, implementation, and adoption of technologies commenced during the project’s lifetime. It is hoped this project will provide a successful framework for land and water restructuring in other irrigated landscapes in Central Asia.
top