Gunung Kidul, the district near to the large city Yogyakarta is one of the poorest areas of Java. One reason for this is the fragmented karst underground, in which the surface water drains away immediately. In the dry season, this leads to water shortage, which affects the agricultural crops for example. In a bilateral project, a subsurface management storage was consequently constructed and cave water was supported through a regenerative hydropower. In the follow-up-project and next to the expansion of the water resource, an IWRM-concept must be now also developed for the optimized water distribution, for the water treatment and for the sewage disposal.

The district Gunung Kidul is located on the southern coast of Java island about 100 km east of the large city Yogyakarta. The administration district is directed by the special province   Yogyakarta and it has an area of about 3000 km². Gunung Kidul consists geographically of three sub-regions: a chain of volcanoes, which separates the district to the north from the really for Java typical fertile rise plants - in the center of the Wonosari Plateau, which is bounded at its northern and eastern edge by the river course of the river Oyo - and in the south and east the Gunung Sewu ("1000 hills"); an about 1400 km² karst hilly landscape, which is caused by a tropical erosion. 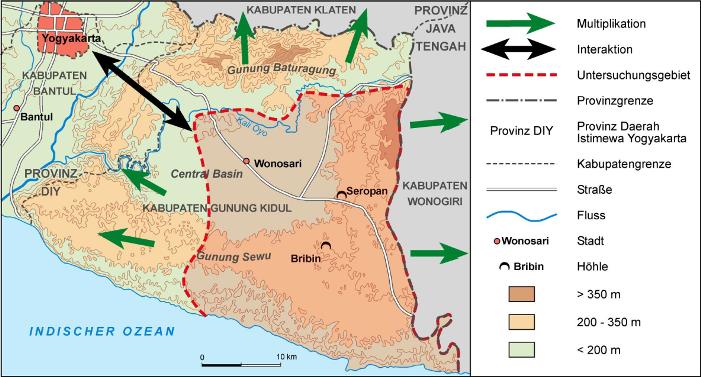 Because of the karsted underground, Gunung Kidul is characterized with an urgent water shortage, especially through the dry season. At the same time, there are huge underground water sources, which are still draining off widely untapped over an extensive cave system in the Indian Ocean. Great efforts have been made over the decades on the part of the Indonesian government in order to make the underground water flows in Gunung Kidul usable. A sustainable solution was not found. The current problems affect not only the water quantity but also the water quality.

Although to date only control samples from the available regular water sources could be taken, they result in a comprehensive image, which is identical with the Indonesian data. None of the tested waters matches the proper drink water quality. It seems that the sanitary question on the background of the shortage situation on the water supply side has a lower priority for the population and for the public administration. There is no well developed decentralized or even centralized sewage purification in the area.

In the year 2002, the Institute for Water and River Basin Management (IWG) of the Karlsruhe University initiated a project promoted by the BMBF, aiming to support cave water over a regenerative hydro power. One of the possible technological approaches was tested within the framework of this German-Indonesian cooperation in the Gua Bribin cave. At the end of July 2008 and during a test mode, this pilot plant aided the first water to the ground level over 100 m long riser. The related measurable improvement of the supply situation increases the need for sewage disposal measurements. A good functioning network was established with taking into account of all significant regional and national public authorities, in order to consider the activities of the last years, in which German and Indonesian industrial enterprises were involved. Moreover, there are intensive cooperation agreements with several universities and research institutes as well as close contacts with the local population and local NGOs. At this position, the patron is Sri Sultan Hamengku Buwono X; the governor of the special province Yogyakarta. 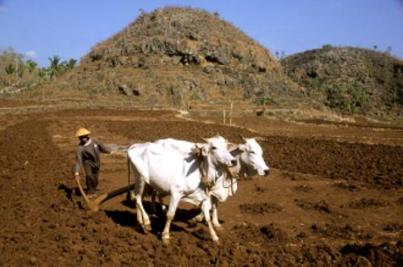 In Gunung Kidul, the need for development works is enormous in all fields of the water sector. An IWRM , must include all fields starting with drink water development, to the structural infrastructure and to the water distribution, to the sewage disposal under consideration of the hydrological, hygienic, ecological, social and cultural as well as business and national economic boundary conditions and consequential effects. The aim is to reach a supply situation, which complies with the WHO-Standards. Moreover, the IWRM must deal with different ways of utilization of water (drink water, industrial water, irrigation etc.). It is therefore very significant to create an awareness by the people in the model region through awareness training and schooling for the sustainable handling with the resource water. 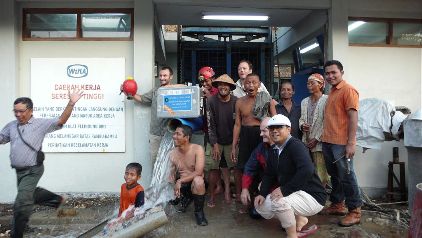 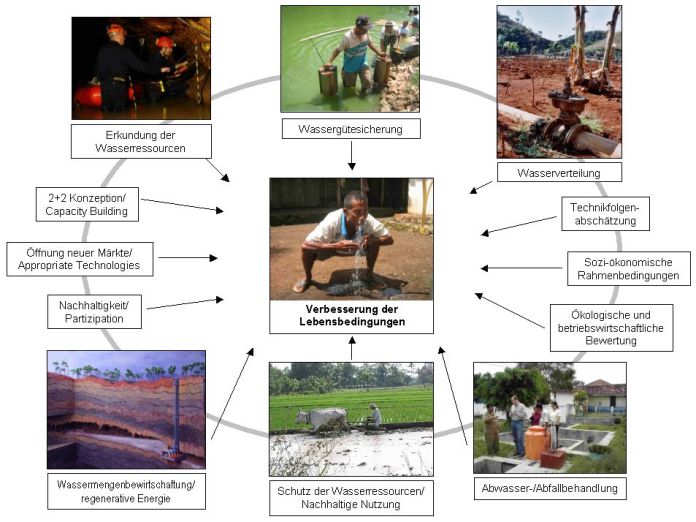 The realization of the IWRM-Konzept in Gunung Kidul must follow within the framework of a joint research project with 18 institutions (project partners) of the Karlsruhe and Gießen universities, the Karlsruhe Research Centre as well as several industry partners in cooperation with Indonesian partners. It was defined from all technical disciplines of the FuE-demand based on the superordinate work packages, besides, a concept was developed for the realization of the key activities in the aim region:

The coordination and interface between the Indonesian partners was taken over from the Institute for Water and Waterbodies Development (IWG) of the Karlsruhe University. 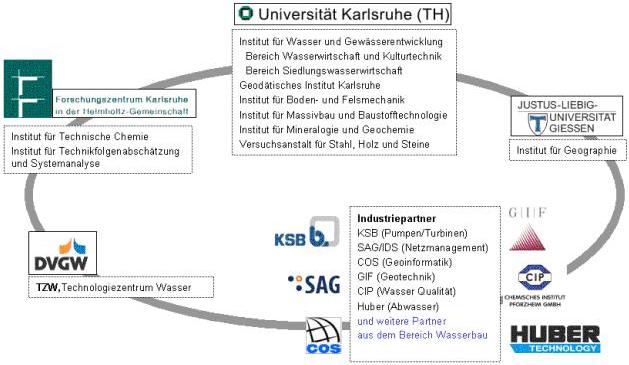 The realization of technical developments focuses among others on the interdisciplinary continuance of the started activities in the Bribin-System as well as on the realization of an alternative conception for water and energy planning of the cave system Gua Seropan as a central water resource of the Wonosari-Plateaus. Therefore, two complementary, academic and economical established concepts would be available for the multiplication of regenerative conveyor technologies in kart areas with adequate practical wealth of experience in the building construction.

In combination with an optimization of the distribution systems  Seropan and Bribin, with the development of an extensive monitoring system for the water quality assurance, in addition to the installation of an adapted water treatment method and sewage technologies, the sustainable water supply would be guaranteed for about 300.000 people in the aim region.

The infrastructural measures are to be accompanied at the water authority Gunung Kiduls with the development of a GIS-supported water management system and its implementation. Furthermore, the participative approach of the project basic concept and the active involvement of population located in the planned "Capacity-Building" contribute to the protection of the water resource in the catchment area as well as of the launching of a sustainable usages.

The experiences from the running project activities as well as the big response of surrounding regions lead one already today to suspect the effect of a future IWRM in Gunung Kidul as "Landmark Project". A multiplicity of research results of the IWRM-Projects are to be also assigned to areas with not karsted underground. Overall, a significant contribution for the solution of the worldwide existing water shortage will be therefore supplied. For this purpose, extensive market chances result for German companies. Last but not least, the project will also boost the intercultural communication.